For those of you who don’t know, monks across Europe were rather fond of gathering up their malts and hops and putting on a good brew in addition to their monastery duties. And they were good at it; their “Abbey Ales” became greatly treasured throughout Europe. The Trappist Monks of Westmalle Abbey in Belgium began brewing a style of ale known as “Dubbel,” or Double Ale, a few hundred years ago. This light brown ale soon became one of the most popular styles of the Abbey Ales, so popular that it has been continually brewed throughout the ages! Sounds epic, right?

Well, fast forward from that first brew at that Belgium Abbey to the new millennia when BJ’s Brewer Derek Osborne tried his first pint of this historic beer. Derek fell in love with the unique fruity flavor of this full-bodied ale. He soon found himself in Belgium where he sampled all kinds of Abbey Ales, sparking the idea of brewing an Abbey Ale to be served at BJ’s Restaurant and Brewhouse. A second venture to Belgium followed during which he toured the Westmalle Abbey and enjoyed the Dubbel Abbey Ale at its place of birth. The experience of casually sipping and enjoying this unique brew in its regal home with Belgium cheeses, hot mustard, and bread rekindled the urge to brew a Dubbel Abbey Ale in the United States. And upon his return, that is exactly what he did.

Derek and some of the other brewers got to work developing a beer as “heavenly” as the Dubbel Abbey Ale experienced in Belgium. After some expected trial and error, the guys nailed down a recipe that when blind tasted side by side with the Westmalle Abbey Ale was more than comparable; it was spot on.

Inspiration for the name was taken from Mel Brook’s Young Frankenstein (1974) in which the character Igor tells a lie that the brain used to reanimate Frankenstein’s monster belonged to someone named “Abby Normal”. And thus, BJ’s Abbey Normal® was born!

Brewer Derek describes BJ’s Abbey Normal as having an incredibly unique flavor profile with notes of vanilla, banana, cloves, prunes, raisins, cardamom, and more. Furthermore, Derek considers this beer to be a“relaxing beer.” “Abbey Normal is not a thirst quencher,” he says, “it is a beer to sit back, relax with, and savor.”

We are thrilled to enjoy this “historic” and “heavenly” beer as the first beer in our 2014 Seasonal Beer series, on tap now at your local BJ’s Restaurant and Brewhouse. Derek suggests pairing this unique ale with any of our menu items with bold yet intricate flavor profiles like our Balsamic Chicken, Bison Burger, Brewhouse Burgers, and even with our desserts! Or of course, you can always enjoy BJ’s Abbey Normal on its own. You might find it to be a religious experience. So, when will we see you for a pint? 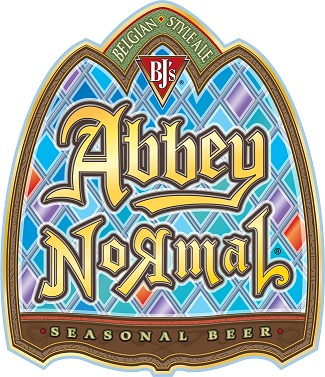 Prev: The Birth Of Nit Wit