For those of you who have enjoyed a pint of BJ's Goliath™ Imperial Red Ale, you know that this craft beer is something special. We feel so strongly about BJ's Goliath, that we entered Goliath in Draft Magazine's Beer Bracket Contest 2014! In Round 1 BJ's Goliath went up against Pilsner Urquell, and thanks to the support of YOU, our guests, Goliath slayed the competition receiving 61% of the votes and advanced to Round 2!

Voting for Round 2 of Draft Magazine's Beer Bracket is happening NOW! BJ's Goliath now faces Rocky Mountain IPA. YOU can help Goliath stay in the battle and advance to Round 3! Here is all you have to do:

1. Visit this link: http://www.draftmag.com/beerbracket/ and register.

You can vote today and tomorrow for Round 2! Hopefully we can take this giant of a beer into the next round! 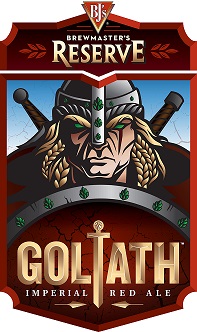