Fall is here, and that means that our palettes are beginning to crave certain flavors. One of the biggest of those flavors: PUMPKIN. Since the start of September we’ve seen all things pumpkin-spiced or pumpkin-infused: it’s in coffee, it’s in bread, it’s in pastries, it’s in ravioli, and of course, it’s in one of our most popular seasonal beers: BJ’s Pumpkin Ale™. A great deal of excitement surrounds this seasonal favorite every year, and this year is no exception. 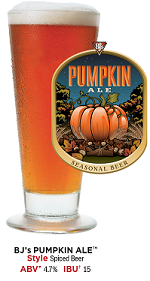 For those of you who are unfamiliar with our Pumpkin Ale, it is in the style of spiced beers; yet it is just slightly spicy to perfectly balance the smooth and sweet start of this rich, orange colored beer with the overarching taste and aroma of beloved pumpkin pie. In looking at the brilliantly composed brew a bit more closely, we reached out to one of our brew masters, Derek Osborne, for a more in depth look.

With the “pumpkin everything” craze that autumn, Halloween, and Thanksgiving has come to bring, there are many other pumpkin flavored ales and beers out there. And so, we had to ask Derek: What makes our pumpkin ale different – special- from all the others? His answer, “We built the beer around the pumpkin”. According to Derek, many other pumpkin brews use pumpkin extract and rely on spices associated with pumpkin pie to create a beer that seems pumpkin-y. BJ’s Pumpkin Ale, however, is made with real pumpkin to craft a beer that is truly pumpkin through and through.

These efforts to create a Pumpkin Ale with a rich pumpkin taste and a full-bodied mouth feel eventually led to a silver medal win at the 2011 Great American Beer Festival Awards. Guests continue to describe BJ’s Seasonal Pumpkin Ale as incredibly smooth, festive, and superbly easy to drink.

As a beer with 4.7% ABV, it is one that can be enjoyed by itself; but of course, we love our beer-food pairings. Our menu suggests pairing our Pumpkin Ale with the Sweet Pig® Pizza or our Grilled Pork Chops, but we asked Derek about his favorite pairings. “Anything that is both earthy and spicy, as that is how the beer is. I really like the Pumpkin Ale with the Moroccan Spiced Salmon, or anything along those lines”. Is anybody craving yet?

BJ’s Seasonal Pumpkin Ale is a fan favorite, and once you’ve had one it is not hard to see why. Fall can be a pretty hectic season for everyone as people adjust to all the demands of the school year and the ever prevalent holiday season closing in, but it is important to take a break and enjoy all that this season has to offer, and that might just mean having a pint of BJ’s Pumpkin Ale. We are tapping on September 30th. So make sure to come on in October and make sure you get your fill before it’s gone!