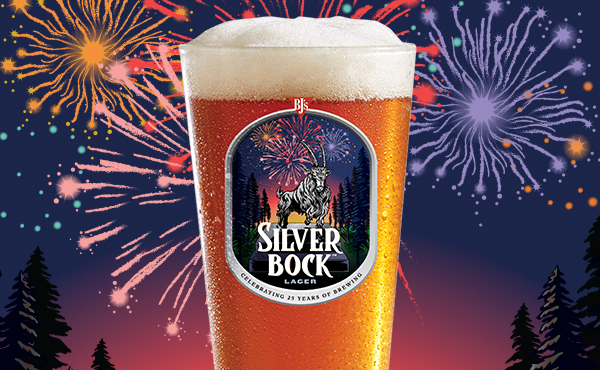 BJ’s Silver Bock™ is the beer our brewing team chose to celebrate a very special anniversary—25 years of brewing! It sure doesn’t feel like that long ago that we brewed our first batches of beer in Brea, California. Have I really been brewing beer for BJ’s for a quarter century? This must be proof that time flies when you’re having fun.

It sure was fun in the early days when we were craft brewing pioneers. One of the first craft breweries in Southern California, we were inspired by great breweries like Sierra Nevada, Anchor and Rogue to the north. These days, I’m having as much fun as ever because the American beer market keeps growing and evolving. Today there are over 8,000 American breweries brewing some of the highest-quality beer in the world in an incredible variety of styles. Twenty-five years ago I never would have guessed that American craft beer would achieve such success.

Back to Bock before I digress too much. What exactly is Bock? Most American beer drinkers associate the style with Shiner Bock, which is nothing like the traditional Bocks brewed in Germany. Bock beers are strong lagers historically brewed in Bavaria for the winter or spring seasons. They are malty, full-bodied and sweet without much hop bitterness. Color ranges from copper to brown, alcohol from 7% to 9% ABV. The darker versions are generally more malty, sweet and alcoholic than the paler versions. German Bock is lagered for many months to give it remarkably smooth drinkability for a strong beer.

After much debate about what to brew to celebrate our 25th anniversary, our brewing team decided on Bock because we wanted to brew a special style that represents our commitment to the highest standards in brewing set in Germany.

Plus, our R&D brewmaster Aaron Stueck has been brewing and perfecting Bock-style beers for a few years in our R&D brewery in Boulder, ever since he experienced Bock at its best while traveling in Bavaria. So Aaron embraced the opportunity to formulate a world-class Bock for our anniversary beer. We opted to brew the paler amber-colored version because the drier profile and lower alcohol make the beer perfect for summer consumption. I’m confident that BJ’s Silver Bock™ is a good example of what American craft beer is all about—a well-made beer in a style that you don’t see every day, and that wows you by how good it is. Prost!

Next: Have you checked out Beer Guys Radio?