Hoppy Scotsman™ from BJ's Restaurant and Brewhouse on Vimeo.

What happens when the ‘Old World’ and the ‘New World’ collide in one brewery? You get an incredible collaborative beer that is a reflection of both! When Director of Brewery R&D Derek Osborne visited the historic Caledonian Brewery in Edinburgh, Scotland, he was blown away by how traditional the brewery and its beers were. There was something different about Caledonian, something very special. Caledonian Brewery was founded in 1869 and is the only survivor of over 40 breweries that once operated in Edinburgh during the 19th century; clearly they’ve been doing something very right for the past couple of centuries. To this day, Caledonian still brews in a direct fire “copper” and uses open fermenters. When Derek brought Caledonian Brewery to my attention, I knew that this was the brewery to collaborate with; to create a beer that combined the best of both Old and New World brewing traditions.

Both the BJ’s Brewing Team and the Caledonian Brewing Team developed the recipe together. Caledonian Brewery is most well known for their malty Scottish Ales like 80/- and 90/-. Caledonian’s Edinburgh Strong Ale, their strongest beer, is what served as the base for this collaboration beer. The BJ’s Brewing Team took this rich, malty ale brewed with the best Scottish malted barley and worked to infuse it with the right American hop varieties. After 3 test batches were brewed at BJ’s Boulder Brewery, the right beer was finally created. And thus, our newest seasonal beer, Hoppy Scotsman™, was born!

The first full batch was brewed at our Reno Brewery, seen above, and we invited Keith Garson, one of the lead Caledonian Brewers to come visit and help with brewing the first batch. The oversight and influence of a real Scotsman definitely paid off. Keith, myself and the BJ’s brewing team are incredibly pleased with the fruits of our labor. The rich, strong Scottish malts are perfectly balanced by the American hops. This beer can appeal to both “hop” and “malt” lovers alike. Not only that, but there is something very special about this beer as it is in part a product of such a well- respected, historic brewery. You won’t find Caledonian’s regular beers in America but you will find Hoppy Scotsman™ at BJ’s while supplies last.

Enjoy a pint on its own, or better yet, pair with food like our New Orleans Jambalaya. We here at BJ’s Restaurant & Brewhouse and those at Caledonian Brewery cannot wait for you to try a pint of Hoppy Scotsman™. 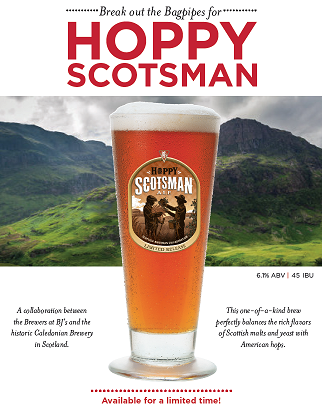