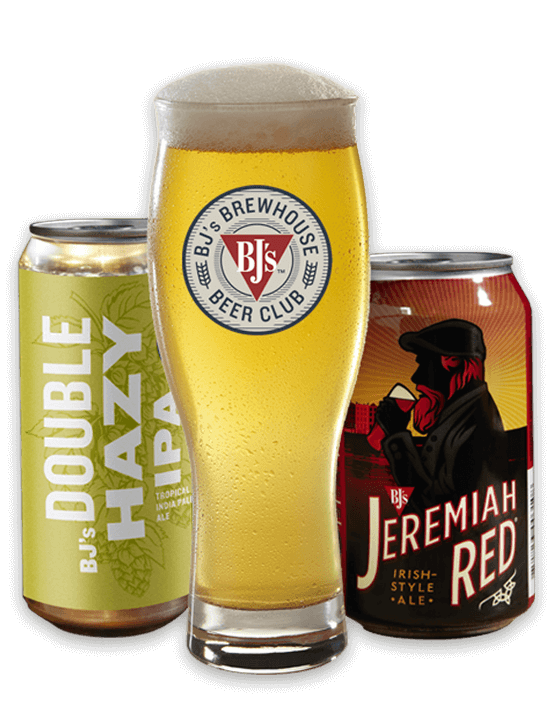 Exclusively brewed beer every other month†  (typically a 4-pack of 16 oz. cans and one 750 mL Bottle)
UNLIMITED

One Pizookie® and one appetizer per two-month period*
Rewards

Members are automatically enrolled in our loyalty program and receive $10 rewards for every $100 spent▼
Can I Be a Founding Member?

Every new member will receive an Intro Pack comprised of one 750 mL bottle of BJ’s Imperial White Ale, 6-pack of any BJ’s Handcrafted Signature Beer, and one Founding Member pint glass. Plus, you can start taking advantage of your perks from the moment you sign-up! 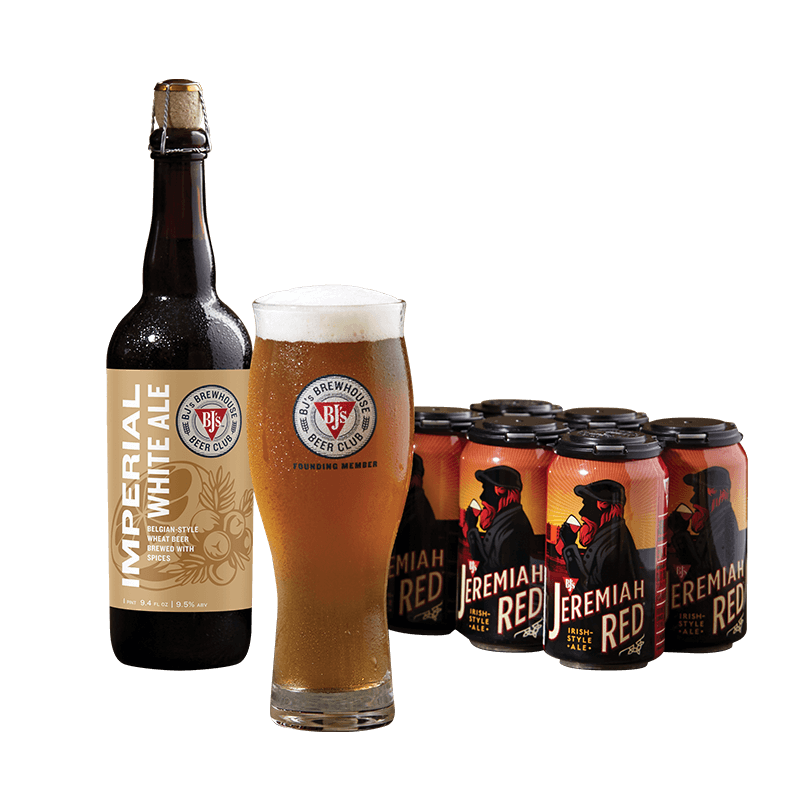 $30 (PLUS TAX) Every Two Months
pickup

AT YOUR PREFERRED BJ'S RESTAURANT IN CALIFORNIA^
faq

Need to get in touch? Reach out here!
Terms & Conditions
WANT TO LEARN MORE ABOUT OUR DELICIOUS BEER?
A word from our brewmaster

DO YOU ENJOY HANDCRAFTED BEER FROM BJ'S RESTAURANT & BREWHOUSE? JOIN THE CLUB!

BJ's Restaurant & Brewhouse has been brewing handcrafted beer since 1996. In fact, our beer has earned more gold medals over the last 5 years than any other restaurant-brewer.

It's safe to say that our beers have amassed a loyal following! We're making it even more rewarding to be a fan of our beer with the BJ's Brewhouse Beer Club. Now is your opportunity to become a founding member of this club.

When you join BJ's Brewhouse Beer Club, you'll start reaping the benefits right away, thanks to the Intro Pack we're currently offering to first-time members. This pack includes a 750 mL bottle of BJ's Imperial White Ale, a Founding Member pint glass, and a 6-pack of any BJ's Handcrafted Signature Beer.

But that's just what you'll get at the very start—the perks continue well beyond that! Every other month, BJ's Restaurant & Brewhouse will brew two different small-batch beers that are exclusive to the BJ's Brewhouse Beer Club. These beers have been specially brewed by our head brewer, Alex Puchner, and will usually be released in the form of a 750 mL bottle and a four-pack of 16 oz. cans. And, when you come to dine with us, you'll get unlimited beer upgrades. Instead of the 16 oz. standard pint, BJ's Brewhouse Beer Club members will enjoy a 20 oz. glass!

And the benefits of BJ's Brewhouse Beer Club go beyond beer. You'll also get dine-in and takeout perks. Every two months, you'll get one appetizer and one Pizookie® (one per visit) when you dine in with us. If you're in the mood for take out, you'll get a large Deep Dish Pizza (one every two-month period), $7 6-packs of BJ's Handcrafted Signature Beers, and $8 6-packs of BJ's Seasonal Beers.

As a founding member of this club, you'll also be registered in our BJ's Premier Rewards PLUS program. You'll earn one point for every dollar you spend (excluding alcohol purchases and certain other exclusions). When you get 100 points, you'll get a $10 reward! This program also gives you access to exclusive deals and offers, plus a Pizookie® every year on your birthday. Visit bjsrestaurants.com/rewards for details.

Learn More About the Beer at BJ's Restaurant & Brewhouse

Beer. Bier. Cerveza. Bīru. Bière. Whatever you call it, we have some of the best at BJ's Restaurant & Brewhouse! Our 11 handcrafted signature beers are brewed with a variety of tastes in mind. Hopheads will love our Committed® Double IPA, while fans of powerful but smooth dark beers will find our nitrogen-poured Tatonka® Stout to be particularly pleasant. What's more, these beers pair perfectly with a variety of our menu items! Try the Brewhouse Blonde® Kolsch-style ale as a refreshing companion to our Brewhouse Blonde® Fish 'n' Chips, or try our Oasis® Amber with BJ's Favorite Pizza. In addition to our flagship brews, we also offer a rotating selection of seasonal beers, so be sure not to miss out! We look forward to serving you world-class handcrafted beer at BJ's Restaurant & Brewhouse.